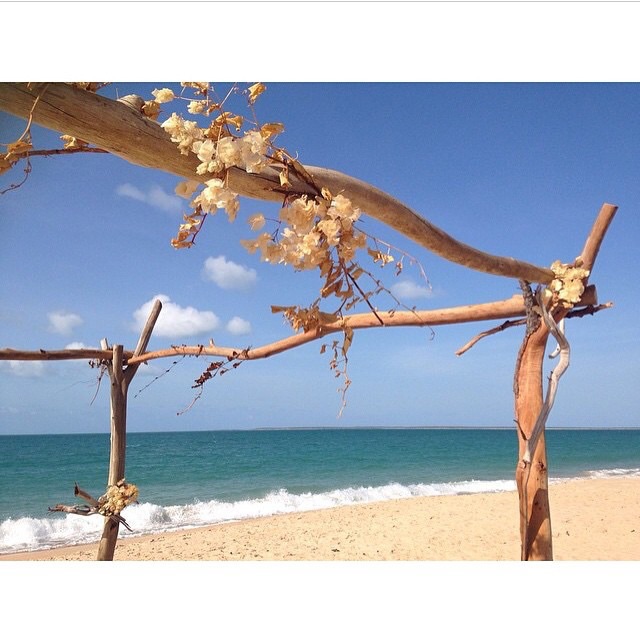 In the heady days following the curtailment of the refinery operations in this remote (very) northern town, we all felt as if we’d been launched onto the set of some strange, cruel new reality game show – a little bit like “Survivor” but with really sharp teeth and much “closertohome” consequences for real people trying to hang on to real futures and real families in a real place … and just as it seemed impossible to watch another “elimination”, witness another closing chapter, there was a wedding …. I spoke about it at the Womens Christmas Gift Exchange in 2014  – and we all laughed … and cried …. for here was a chance to grab a tiny positive, feel a message and understand that it was down to us ….

For on that day, serendipity worked to showcase everything that I love about living here …

Those two people married on that beach met here, planned to stay here and knew that, following their elimination from the game, it was a perfect decision to marry here before they left. For them, this was a crucial element, the essential place for this most significant part of their story. They had two children here who were very much part of their story too.

The wedding was on a beach – of course it was. Their families and dozens of their friends joined them there – and there was a hush as the sun dipped in the western sky and shone a light on years, on generations of our town and those most significant things – the characters who people the chapters of the lives we live here.

A trawler was moored at photo central – of course it was!!!

The bar was set up and the drinks were served by a group of parents raising money for a school trip for their kids – of course they were!

The friends passed the hat around and gathered some funds to be sure that the photos would be magnificent. Of course they did!  And of course they were!  And some featured a ghost of a refinery, billowing just one single white tendril into the atmosphere.

The ceremony took place under a stunning arbour built with driftwood and love …. And despite the elements, it stood for days, weeks and months, a weathered masterpiece, a beautiful organic reminder of the power of this place, the stories that it holds, and its capacity to withstand. Of course, the tide would get it eventually ….

Imagine this – the arbour is still on the beach – built of love and driftwood, marking a moment, telling a story, a new beginning and an ending of sorts held within it – love, time, children, promises – withstanding the storm and the tide.

Some white organza billows around it, and I think I see just a little bit of bling . It is strong, resilient, beautiful and upright.. It is us.